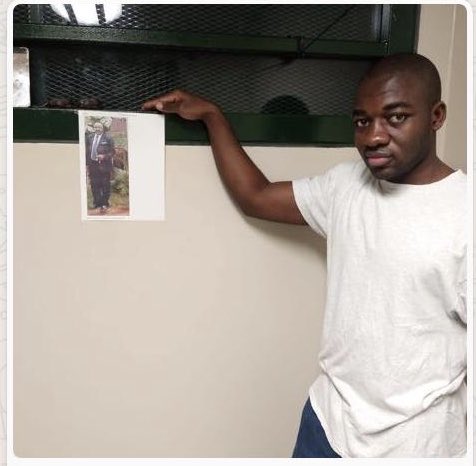 Kenneth says deporting him to Cameroon would be sending him to his death.

The case of a Cameroon man hoping to start a new life in Canada hit a setback this week, after officials with the United States Immigration and Customs Enforcement, or ICE, chose not to release him from custody to attend a meeting with Canada Border Services Agency scheduled for 8 a.m. Friday.

Kenneth, 29, fears execution if he’s deported back to Cameroon. Global News has agreed not to use his full name to protect the identity of family members.

His advocates say he faces charges including hostilities against the Fatherland punishable by death in connection with his participation in a peaceful protest in Cameroon on Oct. 1, 2017.

Earlier this month, Amnesty International called on the U.S. government to refrain from deporting anyone to Cameroon, saying “it is extremely likely that anyone who is returned to Cameroon will face a high risk of being detained, beaten, disappeared, tortured, or possibly even killed.”

Megan Walker, who has been advocating for Kenneth since his case was brought to her attention over the Thanksgiving weekend, is urging the Canadian government to engage with their U.S. counterparts.

“I find it just such a horrendous breach of just everything Canada stands for, and I just don’t even know what to say about it,” she told Global News on Friday afternoon.

“What do you even say to a politician at this point? You know, they’ve got a choice to help keep a man alive in a community like London, Ont., where the support for him is overwhelming, or send him back where he’ll be killed.”

Walker previously noted that if Kenneth were allowed to attend the CBSA meeting and officials concluded that his case had merit, then he would have supports already waiting for him in London, including housing and food.

London North Centre MP Peter Fragiskatos said Tuesday that he’s continued “to raise the issue as best as I possibly can” but he stressed that the decision rests with the United States.

“Kenneth is in U.S. custody. It is not possible for Canadian authorities, even at the highest levels, to free him from U.S. custody,” he explained.

At that time, ICE officials told Global News that they were “coordinating with the Canadian government on this matter.”

As of Friday afternoon, it is unclear whether or not Kenneth will be deported back to Cameroon.

“But we’re motivated and so we are continuing to work the phones. Kenneth is a remarkable man.”

Cameroon is divided along lines created during colonialism by European powers and was first ruled by Germans and then divided among the French and British.

As a result, there are English- and French-speaking regions, with English speakers like Kenneth estimated at about 20 per cent of the population.

Amnesty International says long-standing tensions in Cameroon escalated starting in late 2016 “after a series of strikes and protests against what teachers, lawyers and students viewed as further discrimination against Anglophones.”