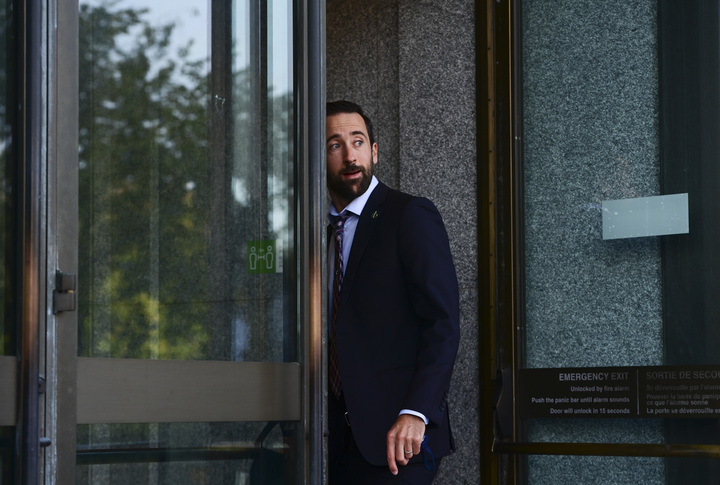 Conservative MP Derek Sloan arrives to a meeting in Ottawa on Tuesday, Sept. 22, 2020.

Conservative Party Leader Erin O’Toole says he has initiated the process to remove MP Derek Sloan from the party’s caucus after he accepted a donation from a “well-known white supremacist,” Paul Fromm.

In a statement Monday evening, O’Toole said Sloan’s acceptance of the donation is “far worse than a gross error of judgment or failure of due diligence.”

“In accordance with the Reform Act, I have initiated the process to remove Mr. Sloan from the Conservative Party of Canada caucus,” O’Toole said in the statement. “I expect this to be done as quickly as possible.”

He said he will also not allow Sloan to run as a candidate for the party.

“Racism is a disease of the soul, repugnant to our core values,” O’Toole said.

Fromm has been a fixture in right-wing politics for decades, including participating in events with the neo-Nazi Heritage Front.

Under the Reform Act, at least 20 per cent of the party’s members must agree to trigger a membership review. A majority of members would then need to vote to oust Sloan from the caucus.

However, at least one Conservative MP, Eric Duncan, has said he supports the move to remove Sloan.

I have had enough too. There is no room for this garbage in our Party.

“There is no room for this garbage in our Party,” he wrote. “Good riddance.”

In a series of tweets, Sloan said he became aware of the donation Monday afternoon, saying Fromm, “a person with known connections to racist groups, donated $131 to my campaign.”

Sloan said, “at no time was I ever aware of this donation,” adding that his campaign received over 13,000 separate donations, which were handled by volunteers.

Paul Fromm is a notorious name to some, but not to everyone, and clearly this name, mixed as it was in the midst of thousands of other donations, did not ring any bells to my team.

“Paul Fromm is a notorious name to some, but not to everyone, and clearly this name, mixed as it was in the midst of thousands of other donations, did not ring any bells to my team,” Sloan said.

The member of parliament for Hastings–Lennox and Addington said once he learned of the donation, he contacted the executive director of the Conservative Party “and requested this donation be returned.”

In a statement later released on Twitter, Sloan said the donation was made under the name Frederick Fromm and said the Conservative Party accepted a 10 per cent cut.

Sloan also claimed Fromm applied to be and was accepted as a party member last summer.

“Therefore the Party, and the O’Toole campaign, failed to uphold the same standards to which they are now applying to me,” he said in the statement.

Global News reached out to the Conservative Party to confirm Sloan’s claims about Fromm’s membership, but did not immediately hear back.

However, Sloan insisted he was not questioning Tam’s loyalty to Canada, and ultimately remained in the party’s caucus.

In a Facebook ad which ran during the party’s leadership race, O’Toole confirmed he had voted against the effort to remove Sloan from the Conservative caucus.

O’Toole ultimately won leadership of the party last year thanks to Sloan’s supporters, and those of social conservative Leslyn Lewis, who backed him instead of his main rival, Peter MacKay, on the last ballot.

Ever since, questions have dogged O’Toole about how he’d seek to ensure the views of social conservatives are respected but also win support among more moderate Canadians wary that those points of view would dominate the party’s agenda.

However, in a statement on Sunday, O’Toole said the Conservatives are a “moderate, pragmatic, mainstream party – as old as Confederation – that sits squarely in the centre of Canadian politics.”

“There is no place for the far right in our Party,” he said.

— With files from The Canadian Press