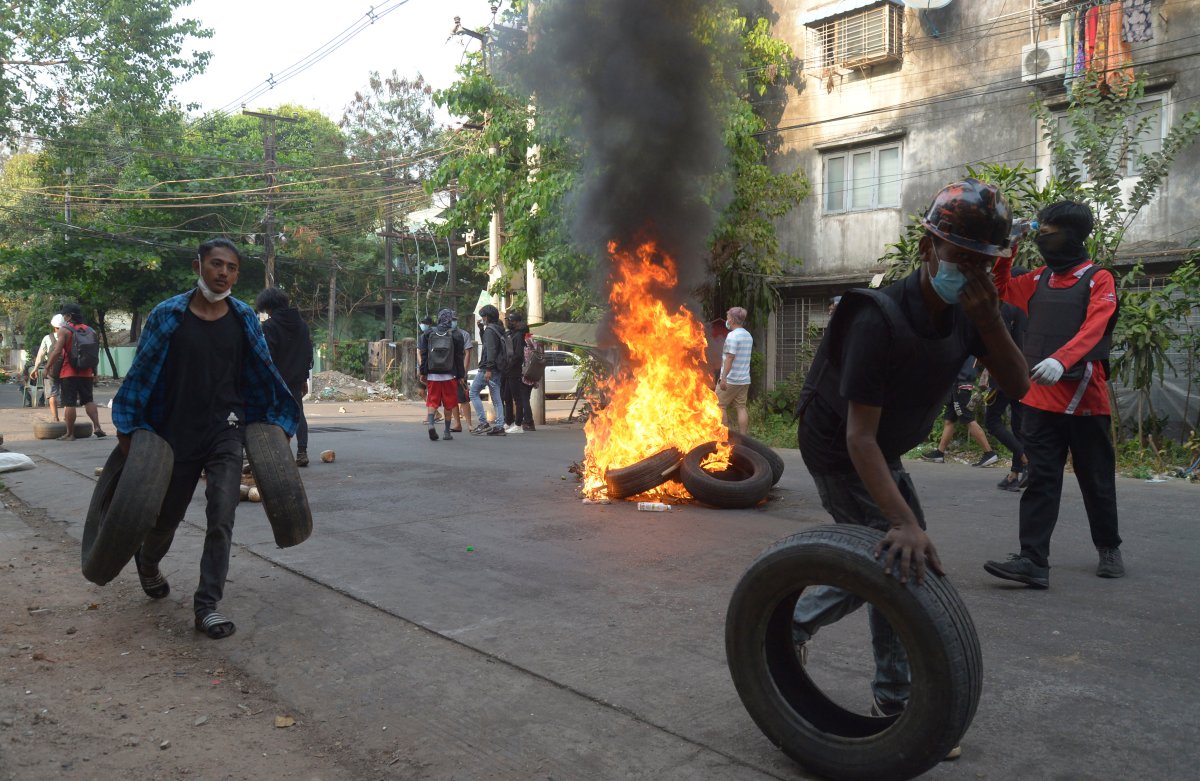 Anti-coup demonstrators gather tires to burn as the prepare to confront police during a protest in Tarmwe township, Yangon, Myanmar, Thursday, April 1, 2021.

The U.N. Security Council late Thursday strongly condemned the use of violence against peaceful protesters and the deaths of hundreds of civilians in Myanmar, but dropped the threat of possible future action against the military following the Feb. 1 coup.

The British-drafted press statement approved by all 15 council members after intense negotiations that began Wednesday expressed “deep concern at the rapidly deteriorating situation” in Myanmar and reiterated the council’s call on the military “to exercise utmost restraint.”

The original draft was much stronger and would have expressed the Security Council’s “readiness to consider further steps,” which could include sanctions. It would also have “deplored” the use of violence against peaceful protesters and “condemned in the strongest terms the killing of hundreds of civilians by the security forces.”

But at the insistence of China, Myanmar’s neighbour and friend, the reference to “further steps” was eliminated and the stronger language, including the words “killing” and “deplore,” was softened in the final statement, council diplomats said, speaking on condition of anonymity because discussions were private.

The reference to “further steps” was replaced in the final statement with a sentence saying council members “stressed that they continued to monitor the situation closely and would remain actively seized of the matter.”

3:34
Dozens killed in Myanmar in one of the deadliest days since military coup

The final council statement also called “on all sides to refrain from violence” — which diplomats said Russia demanded — and “reiterated the need to fully respect human rights and to pursue dialogue and reconciliation in accordance with the will and interests of the people of Myanmar.”

It noted U.N. Secretary-General Antonio Guterres’ March 27 statement “calling for a firm, unified and resolute response from the international community.” That was Armed Forces Day when soldiers and police reportedly killed 114 people while suppressing protests in the deadliest bloodletting since the coup.

She expressed hope the council statement will have that effect alongside the upcoming visit of U.N. special envoy Christine Schraner Burngener to the region and efforts by the 10-member Association of Southeast Asian Nations (ASEAN), which includes Myanmar.

The press statement followed Wednesday’s closed council meeting at which Schraner Burgener warned that Myanmar faces the possibility of civil war “at an unprecedented scale” and urged the Security Council to consider “potentially significant action” to reverse the coup and restore democracy.

She didn’t specify what action she considered significant, but she painted a dire picture of the military crackdown and told the council in a closed briefing that Myanmar “is on the verge of spiraling into a failed state.” She urged the council “to consider all available tools to take collective action” and do what the people of Myanmar deserve — “prevent a multidimensional catastrophe in the heart of Asia.”

Chin’s U.N. ambassador, Zhang Jun, warned the council Wednesday in remarks distributed by China’s U.N. Mission that “one-sided pressure and calling for sanctions or other coercive measures will only aggravate tension and confrontation and further complicate the situation, which is by no means constructive.” He urged all parties to find a solution through dialogue that de-escalates the situation and continues “to advance the democratic transition in Myanmar.”

The coup reversed years of slow progress toward democracy in Myanmar, which for five decades had languished under strict military rule that led to international isolation and sanctions. As the generals loosened their grip, culminating in Aung San Suu Kyi’s rise to leadership in 2015 elections, the international community responded by lifting most sanctions and pouring investment into the country.

At Wednesday’s virtual meeting, Schraner Burgener denounced the killing and arrest of unarmed protesters seeking to restore democracy. She cited figures from Myanmar’s Assistance Association for Political Prisoners that as of Wednesday, some 2,729 people have been arrested, charged or sentenced since the coup and an estimated 536 have been killed.

This was the second press statement approved by the council since the coup.

The council also adopted a presidential statement — one step below a resolution — on March 10 calling for a reversal of the coup, strongly condemning the violence against peaceful protesters and calling for “utmost restraint” by the military. It stressed the need to uphold “democratic institutions and processes” and called for the immediate release of detained government leaders including Suu Kyi and President Win Myint.

The statement approved Thursday also calls for their immediate release and called for “safe and unimpeded humanitarian access to all people in need.”

The council addressed another major issue facing Myanmar’s military — its relations with ethnic minorities, especially Rohingya Muslims in northern Rakhine state. Over 700,000 Rohingya fled a military crackdown in 2017 and are now in camps in Bangladesh.

Council members said “that recent developments pose particular serious challenges for the voluntary, safe, dignified and sustainable return of Rohingya refugees and internally displaced persons.” It said it is vital “that the rights of ethnic minorities are fully protected.”

Schraner Burgener on Wednesday pointed to intensified fighting in Kayin and Kachin State. The opposition of ethnic armed groups to “the military’s cruelty … (is) increasing the possibility of civil war at an unprecedented scale,” she said.

Vietnamese Ambassador Dang Dinh Quy, who assumed the rotating Security Council presidency Thursday and whose country is a member of ASEAN, said at a news conference that “the number one priority now is to stop violence” and create an environment conducive for dialogue.

Dang said ASEAN is in “a unique position” to engage the different sides, including the military, and make them “understand what is good for them, for Myanmar, today and for the future.”